Final week!! Welcome back- and so begins the final week. Friday saw the final matches of the group stages being played. There was huge excitement as these matches decided who might make the semi finals. 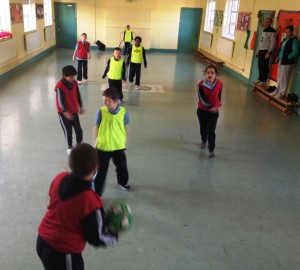 In Group 1, Ireland took on Lithuania. A win for Ireland would see them through to the semi-finals with Lithuania only needing a draw to progress. The atmosphere was tense but in the end Lithuania did enough to win the tie and push ahead of Ireland. In the second game the hard work of Ronald Krok saw Benin beat Romania and leap frog Ireland to claim second place. So after 3 matches Lithuania top the group and go on to contest the semi-finals on Tuesday with Benin’s impressive victory ensuring they claim second spot. 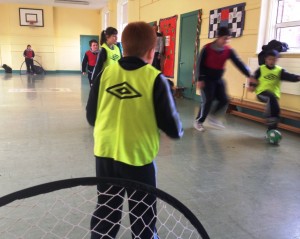 In Group 2, Zimbabwe’s partnership of Conor and Gift continued to impress this week scoring 6 goals, including a hat trick by Conor over their rivals Estonia. Some brave football by John Campion saw John beat the Zimbabwean keeper for the first time in this competition and claim a goal for Estonia. Unfortunately it wasn’t to be enough and Zimbabwe cruised to victory. In the other match in the group Poland recorded it’s first win of the campaign with an impressive 3-0 win over Italy.

Group 3 saw one of the games of the tournament with a truly inspiring performance by Martin Keane. The Philippines came into this match having only won one match in the competition and fighting to scrap into second place. Slovakia’s fate was in their own hands needing only to win to jump South Africa into first place! Disaster struck in the first half with Philippines netting two goals and Slovakia were shell-shocked. However, with huge determination and a great fighting spirit, Slovakia fought back and they were within a goal of Philippines with only minutes to go, but it wasn’t to be and Philippines went on secure the win with a last minute goal. The tie ended 4-2 and Slovakia missed out to South Africa for the place in the finals. Hard luck brave Slovakia.

Finally the winner of Group 4, was already decided by last week, thanks in the main by some impressive football by Michael Hutchinson and Ajay Jones. In action this week was India and Brazil. Despite some great goalmouth heroics, by Katie Kearney, the football giants Brazil cruised to an impressive 2-0 victory and secured them the second place spot. Well done Brazil!

So as the group stages draw to a close, we see 3 African teams: Morocco, South Africa and Zimbabwe progress to the next stage alongside European side Lithuania.

The semi-finals will see Lithuania face the impressive Zimbabwe, while Morocco takes on the mighty South Africa.

Best of luck to all the teams in the finals and to all those who took part!